“It’s really not an intellectual film,” he says. “I don’t think it’s a film that you can experience intellectually, it’s really a physical movie that goes into your stomach, or doesn’t.”

World premiering Friday at the Locarno Film Festival, “Soul of a Beast” follows teenage father Gabriel (newcomer Pablo Caprez) who falls in love with Corey (Ella Rumpf), his best friend’s girlfriend, during a delirious summer rush. Wrenched by the decision to stay and take care of his son or follow Corey to Guatemala, Gabriel is catapulted into the unforgiving wilderness of his heart, where imagination is more real than reality.

The film is a pulsating affair set in a crumbling urban world brought to life using special effects, and incorporating a trippy mix of animal symbolism and Japanese fairytale influences.

“Soul of a Beast” is Merz’s second feature and represents a return to Locarno after his debut film “Cherry Pie” premiered at the festival back in 2013. In the eight intervening years, Merz has served a DOP on a number of features including “War,” through which he met “Soul of a Beast” female lead Ella Rumpf. In Caprez, the director found “a perfect match” for Rumpf, with sparks of electricity flying between the two from the first time they set eyes on each other.

Variety caught up with Merz ahead of the “Soul of a Beast” premiere to discuss the film’s origins and those Manga-inspired moments.

Are you looking forward to launching “Soul of a Beast” on the big screen?

Yes, I actually just watched it in a theater with the main actresses. It was shot three years ago and they’ve done a lot of bigger projects since. They’ve progressed on their journey as actresses, so they were a bit worried about whether this was an ancient project that they would be ashamed of it, but they were super proud coming out of it. They said they’d never seen anything like it before.

What were the origins of the film? It’s clearly a very personal one for you.

It started with the fact that I became a father very young, around 17 or 18, and at the same time, some very close friends of mine died. I had this overwhelming feeling, an intense present feeling of being alive in a paradoxical way. That always stuck with me, that change of perception. Experiencing birth and death almost at the same time had a huge impact on my way of appreciating things and made me question what freedom meant in my own life. I was a young person dreaming of traveling the world, but at the same time taking the responsibility of having a little child.

And how did you want to channel that in “Soul of a Beast”?

I took the base of those facts and transformed them into fiction. This isn’t my story, it’s about the feeling it should transmit. I actually wrote the treatment in two weeks, then went away and did a lot of DOP work on other features, before going back to it. I’ve been carrying it around for around 10 years.

You describe it not as a “mournful, melodramatic coming of age drama,” but as a “contemporary coming into life” film. What do you mean by that?

This young character, the father (Gabriel), is used to his usual habits, his usual way of looking at things, and then when harsh blows happen, everything changes and his perception changes. He’s coming into life, growing up in a system that we take for granted, and then once unusual things happen, he breaks with it all and he starts to question the logic of what he knows. He feels like he’s been reborn again. When you have a kid, you re-live and re-watch every little step that you forgot in the course of your own journey. I wanted to show these existential things that remind you of what really counts in life. 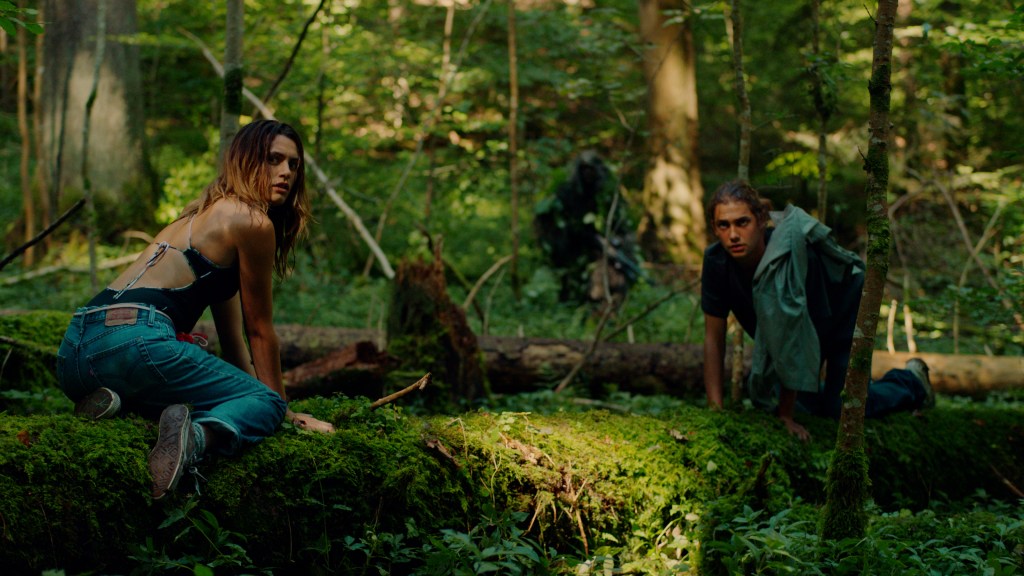 How did you want to portray the love story between Gabriel and Corey (Ella Rumpf)?

It’s super fast. With the love of your life, there’s one look and everything is there. But at the same time the movie isn’t about this. It seems to be, but then everything breaks apart. It’s a movie about falling in love and then falling apart. The beauty of falling in love comes to be lived in your body and your perception and everything seems to change, but that makes it harder to break afterwards.

The film is sprinkled with Japanese influences, where did those come from?

The loose ideas, the first pictures in the beginning came from the Japanese graphic novel of “Lonesome Wolf and Cub.” It’s about a samurai who became an outlaw with his son, and he’s on an eternal revenge journey because his wife was killed. It’s super poetic and super violent at the same time. The kid is always present and keeps this pure view. I think Japanese art has influenced everything I’ve ever done in my life, I’m very touched by the culture itself and the discrepancy between the super sensitive small things and the super violent things and the way those two come together.

What are your hopes for the film?

Of course, I want it to be seen by as many people as possible, but at the same time it’s a very personal film. The people who took part in it have their own personal stories with it, and I love making things that have an impact in real life and aren’t’ just made for their own value. I hope it will stand out somehow, and maybe touch something in the people close to me who were involved in it. I just want to keep on doing what I love doing.