(Tobis.de) SUCCESSFUL SHOOTING OF THE BESTSELLER FILM A WHOLE LIFE 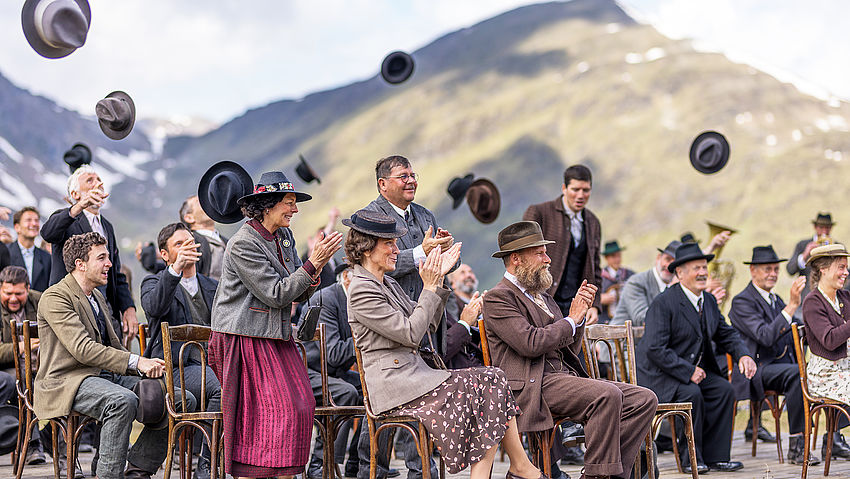 The epochal cinema production of the world bestseller of the same name by Robert Seethaler is in the can.

After a total of 47 days of shooting, 10 of which were in the winter block, the film adaptation of the novel EIN GANZES LEBEN, based on the screenplay by Ulrich Limmer, has been completed. The project took the film crew headed by director Hans Steinbichler and cameraman Armin Franzen to spectacular locations in East and South Tyrol as well as in Chiemgau in Upper Bavaria.

At the end of the shooting, epo-film producer Jakob Pochlatko turned to his dedicated production team with great gratitude:

"We are very happy and proud to have completed the shooting of our ambitious project successfully and in the highest quality, despite the difficult high alpine conditions and the associated imponderables."

Because regardless of the already demanding high mountain location, the film crew had to contend with all kinds of freak weather from thunderstorm fronts to falling rocks, floods and hailstorms. The TOBIS managing directors and co-producers Timm Oberwelland and Theo Gringel are very proud of the result that has now been achieved:

"TOBIS is pleased about the successful completion of the shooting of this special film and about being able to present the audience with a very special cinema experience in the coming year with EIN GANZES LEBEN."

“Despite all the tragedy, EIN GANZES LEBEN will certainly not be a 'downer', but a film experience that will leave you feeling deeply relaxed and positively released. Although the protagonist Andreas Egger has actually lost everything, he still dies a contented person. The story 'A Whole Life' is by no means just a drama, but the story of a whole life with times to laugh and times to be happy, with times to be happy, but also times to be sad. We will all find ourselves in Andreas Egger, because we are familiar with his feelings and perceptions and ultimately we ourselves strive for this contentment and humility that this simple man has shown and exemplified to us in his life.”

The main role of Andreas Egger is embodied by a total of three actors. The new discovery Stefan Gorski takes on the role from the age of 17 to mid-40s, while the older Egger is played by the American-Austrian actor August Zirner (What doesn't kill us, Wackersdorf). Ivan Gustafik plays Egger as an 8-year-old boy. Other roles include top-class actors such as Andreas Lust (Revenge, And tomorrow the whole world, The Ibiza Affair), Julia Franz Richter (Undine, The Diver), Maria Hofstätter (Paradise: Faith, Fox under construction), Thomas Schubert ( Breathe, Axiom, Nebel im August), Marianne Sägebrecht (Out of Rosenheim, Der Rosenkrieg) and Robert Stadlober (Das Boot, Duel - Enemy at the Gates, Leberkäsjunkie). Ulrich Limmer (Schtonk!, Comedian Harmonists, The end is my beginning, Fog in August) wrote the screenplay based on the novel, directed by Hans Steinbichler (Winter Journey, An Outrageous Woman, The Diary of Anne Frank, The Boat Season 3). DoP Armin Franzen (Gladbeck, How to Sell Drugs Online (Fast), DAS BOOT Season 3) is responsible for the camera.

The theatrical release of EIN GANZES LEBEN is planned for 2023 in Germany by TOBIS Film and in Austria by Constantin Film. The film is a production of epo-film produktionsgesellschaft.mbh Vienna (Jakob Pochlatko and Dieter Pochlatko) and TOBIS FILMPRODUKTION MÜNCHEN GmbH (Timm Oberwelland, Theo Gringel, Tobias Alexander Seiffert and Skady Lis). EIN GANZES LEBEN is funded by the FFF Bayern, the DFFF and the FFA; as well as from ÖFI, ORF, FISA, CineTirol and IDM Südtirol.

At the beginning of the 20th century, Andreas Egger came to the valley where he would spend most of his life as a small orphan boy. He grows up with his uncle's family, a mountain farmer who uses him as cheap labor and where he finds little love. At the age of 18 he left the farm and got hired as a forest worker for the cable car construction that was just beginning. The hard work doesn't bother Egger, he earns his first money with it. From this he leases some land and a simple wooden hut high up in the mountains. A little later he meets Marie, the love of his life, but their happiness together is short-lived. A dramatic event literally tears her out of his life. At the end of his life of hardship, Egger looks back on what happened with great amazement and no regrets.