(The New York Times) The Ground Beneath my Feet Review

A Woman on the Run

It’s hard to stand still when you have troublesome co-workers, a mentally ill sister and the need for exercise. 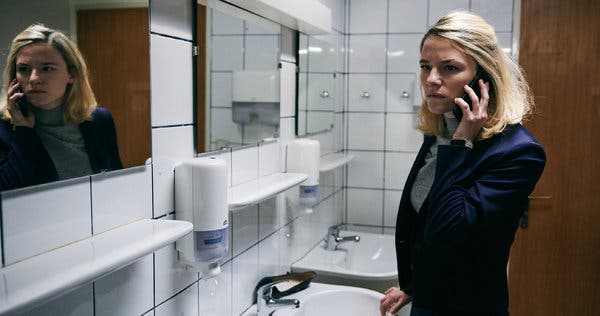 There are some things worse than hacking one’s way through a gig economy, particularly if you’re a woman. Take the case of Lola Wegenstein, who’s trying to find stability in multinational corporate hell. Beautifully played by Valerie Pachner in this searing film written and directed by Marie Kreutzer, Lola is attractive, intelligent, and health conscious — the opening scene shows her on a morning run. She’s also a walking ball of anxiety in her professional role at a high-powered consulting firm that trims the fat from troubled companies.

The conscience-challenging part of corporate work notwithstanding, Lola is constantly undercut by male colleagues (one of whom taunts her by exposing himself after she indignantly follows him into the men’s lavatory) and she can’t even trust her immediate superior, who also happens to be her girlfriend.

Her firm is also one of those places that doesn’t like employees bringing any personal drama to the office. And Lola has some. Before Lola goes on her run, she’s depicted waking up in abject terror. Lola’s older sister, Conny (played with spectacular, terrifying vividness by Pia Hierzegger), is schizophrenic. Her most recent suicide attempt has landed her in a mental hospital, from which Conny pesters Lola with phone calls claiming patient abuse. Except that the hospital insists that Conny has no phone access.

While it sometimes dons the characteristics of a psychological thriller, “Ground” eventually unfolds a powerful, metaphor-driven fable, one full of sorrow and anger about the way we live now.

Every so often this very measured movie seems to be proceeding with something less like deliberation and succumbing to longueurs. But then, a gesture or movement from one of its characters will practically lash out, like a cat irritated at being belly-rubbed. This is crafty, first-rank filmmaking.

The Ground Beneath My Feet Review - The New York Times.pdf (93.6 KiB)