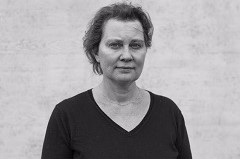 At International Film Festival Rotterdam, we sat down with Dutch director Clara van Gool to get the low-down on her Dutch-Luxembourgish co-production The Beast in the Jungle, which was adapted from a 1903 Henry James novella and is screening in the Limelight section of the gathering.

Cineuropa: How did you come up with the idea for this project? Why did you choose this particular novella by Henry James, and why did you adapt it by spanning different periods of history?
Clara van Gool: When I read the book, I could see that it could be the premise for a dance film, like my previous ones; the novella is about something you cannot describe with words, and I read it a bit like a duet that is waltzing around the subject all the time. In the book, you don't really know what the Beast is, and for me, if you want to understand what is going on, you have to see it as choreography – not as the choreography of movements, but of words. Underneath the words, I could see a whole labyrinth of emotions, and I thought that this sort of image could be translated effectively into a film.

Do you think dance is a better form of communication than words?
Yes, it’s better, but not in a moral sense – I’m happy that we have words as well! I think dance is more direct and universal, and you can express certain things with it that you can’t with words. You can also evoke more passion with a dance move than you can with a dialogue.

Did you write every part of the movie?
It took a long time to conceive the movie as I wanted it, and it was difficult to tell other people, on paper, what my vision of the film was. In the script, I had already written where I wanted the straight acting and where I wanted the dance scenes to be, although I hadn’t mentioned the kinds of movements. Before the shoot, we worked for three weeks with the actors and a movement director to choreograph all of the scenes. During the shoot, first of all we did all the takes with dialogue, then the ones without dialogue, with music, so in the editing suite I could choose whether to use a voice-over or the text.

You say in the movie that the relationship between John Marcher and May Bartram is impossible, no matter the period. Is the Beast always ready to attack?
Yes; when I read the book for the first time, I thought it was a very modern theme. The kind of relationship was very contemporary and unconventional, where you choose to stay friends and not to have a love affair, which is something that you can imagine nowadays as well. But I wanted to probe what the meaning of the Beast would be, because if you write a story in 1903, you may think the Beast is the First World War; but if you are actually surrounded by the war, what is the Beast then? In the 1960s, the Beast was the sexual revolution, but what does it mean now? What is going to happen now in a globalised world filled with so much anxiety? This is the other kind of Beast, and the beauty of the story is that, in the end, it’s something small and internal, something that John Marcher had to find out for himself. He was missing something important in his life, and this realisation is the Beast: it’s something very small on the inside, whereas he was thinking it was something that would come from outside. This is a very classical theme.

You could interpret the meaning of the Beast in different ways – while reading the book, the first part made me think about the latent homosexuality of the main character, but you seem to go in a different direction. How hard was it to adapt a book with such a wide array of interpretations?
The hardest part was writing the script when the story becomes very psychological, as this is difficult to film. In the book, you don't know anything about the characters; they are very deep but also light, like dancers. You don't know how old they are or what their backgrounds are, and this is too elaborate to explain. It doesn't matter if John Marcher is homosexual; it is very obvious, and he could even be likened to Henry James, who never had a sexual relationship. My film would have turned out like this if I had used traditional actors, but I was interested in a more poetic interpretation of the story.