(The New York Times) ‘Endzeit’ Review: Once Upon a Zombie Apocalypse

The German movie “Endzeit” — “Ever After” in English — approaches the subgenre by folding the undead into a fairy tale. It’s once upon a time in the apocalypse and zombies have taken over the country (and perhaps the rest of the world). Only two cities remain safe, including the heavily defended Weimar, where the heavily medicated Vivi (Gro Swantje Kohlhof) lives in an institution. She vacantly stares into the beyond, troubled by the past and the terrors swirling in her head.

The director Carolina Hellsgard sets the scene efficiently, sweeping the camera over the eerily empty streets and snaking coils of razor wire. The barricades convey fear, but also defiance and optimism. People here clearly want to make it through the apocalypse, though what Vivi wants is less certain. Trembling, eyes darting, she seems lost in her own dread or indecision or drug-induced haze. It’s all very unclear and not that compelling, especially since fast-moving zombies are chomping in the wings. 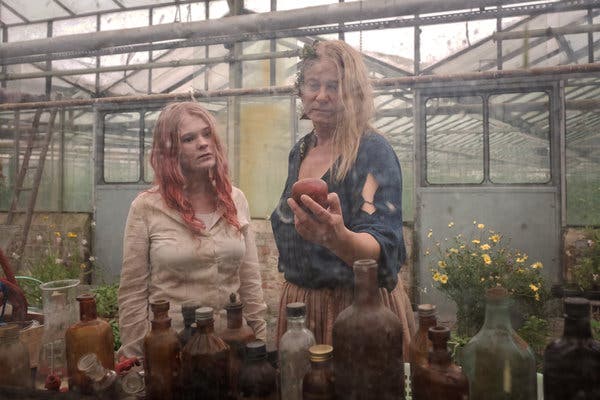 Things look up once Vivi visits the barricades, where she meets Eva (Maja Lehrer), a tough number who helps keep the fortifications intact and the ravenous threat at bay. Vivi has volunteered to assist. But the situation conveniently goes south when a zombie chomps another volunteer, whom Eva is forced to kill. Every zombie movie creates its own rules, and here a bite isn’t remedied by lopping off, say, a limb but by a fatal blow or bullet. (“Endzeit” was written by Olivia Vieweg, who also turned it into a graphic novel.)

That dead volunteer is a sacrifice to the narrative gods, one of those disposable characters who spurs change and momentum. Soon Vivi and Eva are sneaking out of Weimar on a supply train headed toward Jena, the other remaining protected city. Things go from bad to way worse, partly because — as the barricade scene showed — characters in “Endzeit” have a habit of putting themselves in dangerous situations, having apparently never watched a horror movie. It can be exasperating and it also stokes your sadism, particularly when Vivi’s helplessness (she escapes in flip-flops) feels like a contrivance.

Yet once Vivi and Eva are forced off the train and start wandering the countryside, the forest seems to fold its arms around them, and “Endzeit” modestly deepens into beguiling mystery. It’s a tricky transformation and not altogether steady, largely because the locations — Weimar, the train, the woods, a watchtower — point to World War II and, by extension, the Holocaust. These invocations of the past feel too heavy for the story, which finds its footing when it leaves history behind. It’s then, with the help of a runaway bride and some environmental hippie magic, that this blurry movie morphs into a fine fable about life, death and female self-determination (plus zombies).